Pizza at Grana and Flamenco at Bedell Cellars

That makes a great combination, as Marian and I can attest. On Sunday last, we headed out for an afternoon visit to Bedell Cellars, where guitarist Vito Genna was to entertain with Flamenco, Classical, and Modern guitar performance. All over the North Fork, wineries, hotels, and restaurants are hosting musicians performing everything from Jazz to Rock. You have five more weeks to participate in LI Winterfest, so don’t squander your opportunity to get out and have some fun. Before the aural entertainment, we engaged in some oral enjoyment, at Grana.

Grana is a great trattoria in Jamesport NY, right on Rt-25. Brick oven pizza restaurant by day, with home-made pastas and other authentic offerings in the evening. We neglected to ask the folks at Bedell about the availability of food, so we headed for Grana with pizza in mind. The chef’s hand with the pizza dough and the super-hot wood-fired brick oven delivers a thin and crispy crust that can’t be beat. This time we asked for the simple yet perfect Margherita pizza, with tomatoes, fresh mozzarella, and basil. A simple dish, well made, is a great test of a restaurant. As Grana’s chef put it, “there is no place to hide” with Margherita. It works or it doesn’t, and there is no third choice. This one worked perfectly. Good thing I snapped the photo before the pie disappeared. We look forward to returning to Grana for dinner.  Meanwhile, it was time for some wine and music.

Bedell produces some terrific wines. The $20.00 per person price of admission to each LI Winterfest

event includes a glass of wine (for those of drinking age, of course) and Bedell had their Taste Rose on offer. Before we could taste the Taste, we needed seats. Having arrived a few minutes before the 1:30 pm start, we discovered that many tables and seats at the bar were already taken. A word to the wise is to arrive at your chosen venue early, if you want a good seat.

We squeezed in at the tasting bar, and enjoyed the 2012 Taste Rose. It is dry with great acid, and delicious fruit. at $20.00/bottle, we would recommend this wine with two corks up. With modest alcohol, it was a good choice to start the afternoon, leaving us awake for music and more wine. Note the cool label art by Barbara Kruger. She created this exclusively for Bedell.

When I heard Vito play, I knew I should have practiced my classical guitar more during my youth. Today, mine sits in a closet while Vito’s is bursting with beautiful sound. He played steadily, with selections ranging from traditional Spanish to Santana. Marian, who had lived in Spain, acknowledged the authenticity of Vito’s sound. His music, along with the wine, catalyzed quiet conversation at the tasting bar and throughout the Bedell tasting room. Far from  background music, Vito inspired his audience, and we hope to hear him again at other Long Island venues.

It wasn’t Vito alone that proved inspiring. There was the wine. Bedell has had a long tradition of producing excellent wines. Along with some new friends we made at the tasting bar, a couple from Baldwin, NY, and another from Sayville, NY, we moved on from the Taste Rose to the 2012 Merlot. Yes, it is a beauty. At $35.00/bottle, this wouldn’t be an every day pour for us, but its mouth-filling dark fruit is enticing. It will call to you.

Seeing that we enjoyed the Merlot, tasting room host Chris offered us a taste of their renowned 2010 Musee. This is an award-winning wine that, according to Bedell, received the single highest score from Wine Spectator, of any red wine made in eastern North America. At $90.00/bottle, Bedell is very proud of this wine. They have good reason, as it is lush, chewy, and full of black fruit. Feeling flush? Here is your go-to Long Island red. More down to earth? Go with the 2012 Merlot, and you will be glad you did.

Having neglected to ask about the availability of food at Bedell, we were pleased to see that the North Fork Food Truck was idling in the Bedell lot, dispensing sandwiches and sides in recyclable paper containers. We had first met these folks at the Taste of North Fork, and I’m sure they were a welcome sight to Bedell’s visitors. Yes, we had a great lunch at Grana, but many of the Bedell visitors arrived with their appetites all ready to go. 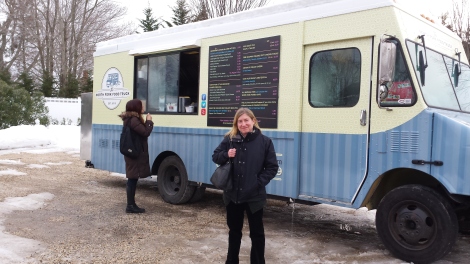 You can see their menu here. We have it on good authority from our neighbors at the tasting bar that the pulled pork is “killer”, so you know what to do. When you pick your Winterfest venues it would be a good idea to call ahead and find out whether the food truck will be visiting, or what other plan they have made for feeding the hungry.

This coming weekend of 2/14 through 2/16 will offer a range of artists and styles, ranging from Blues to Country, with a heavy emphasis on jazz. Hard to choose, so stay tuned to see what we saw, heard, and sipped. Until then, enjoy your trip around town.

One response to “Pizza, Flamenco, and Vino”